Keeping Karabus up to date 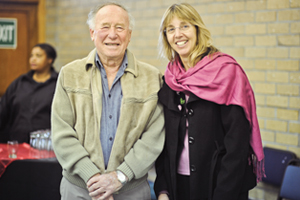 Unimpressed: Dr Cyril Karabus, pictured here with Prof Heather Zar of the School of Child and Adolescent Healthcare (SCAH), didn't mince his words when he criticised the government, media and hospital officials of the UAE recently at a UCT event celebrating the achievements of students of SCAH.

As he has an association with the University of Cape Town that stretches back 56 years, it comes as no surprise that retired Dr Cyril Karabus still regularly attends meetings held by the university's School of Child and Adolescent Healthcare (SCAH).

Karabus, an emeritus associate professor at UCT, returned to Cape Town in May after being detained in Abu Dhabi for nine months on charges of manslaughter and fraud. The case, which attracted international outrage as a miscarriage of justice, made headlines across the globe, and particularly in his home city of Cape Town.

Within a week of his arrival home, Karabus - a paediatric oncologist who graduated from UCT in 1957 - began attending the SCAH's weekly oncology and haematology meeting on Tuesdays, as well as the clinical meeting on Wednesdays. He attends the meetings "to keep up to date with the latest developments" in his field.

Speaking at an SCAH event recently, he launched an scathing attack on the authorities in the United Arab Emirates (UAE), calling the government there "a dictatorship".

"There is a lot to be criticised about the regime, but it doesn't happen there because it really is a dictatorship, and the dictators control the press and the airlines. Dictators presumably also control the hospitals, even though they are supposedly run by foreign companies," he stated.

Karabus was officially welcomed back to UCT at this event, held at Red Cross Children's Hospital in celebration of the achievements of students of SCAH.