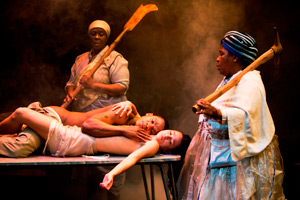 The Baxter Theatre Centre's hit play Mies Julie, written and directed by Yael Farber, has come home from a record-breaking international tour to sell-out performances on its home turf.

Since Mies Julie's first run at the Baxter Theatre last year (and a run at the Grahamstown National Arts Festival), the production has since played to full houses at the Edinburgh Festival in Scotland, St Anne's Warehouse in New York, and the Riverside Studios in London.

In Edinburgh, it beat 2600 other shows on the fringe festival to scoop three prestigious awards, and in New York it was listed by the New York Times as one of the top ten theatre productions of 2012. In London, more than 20 000 tickets were sold while it received 10 five-star ratings.

"It has been tremendously exciting to work with Yael again and to be part of bringing to life her incredible vision and interpretation of this classic, aptly transposed to contemporary South Africa," says Lara Foot, Director and CEO of the Baxter Theatre Centre and international producer of Mies Julie.

"The journey so far is nothing short of overwhelming and exhilarating. Yael has brought together an absolutely amazing cast and creative team to present a fresh take on this play which made theatre history in South Africa in the 1980s. We are truly grateful for and proud of our partnerships with the National Arts Festival, Grahamstown, the Edinburgh Festival and the South African State Theatre, who all share in this phenomenal success," adds Foot.

In a contemporary reworking of August Strindberg's classic Miss Julie, Farber has transposed the 1888 parable of class and gender to a remote, bleak farm in the modern day Karoo. Farber's interpretation tackles the deeper complexities of South African society.