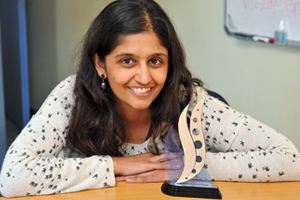 With a corps that is 83% white and almost 80% male, the actuarial profession in South Africa faces formidable transformation challenges.

In the field, an amalgam of advanced mathematics and statistics, UCT's Shivani Ramjee is rare as hen's teeth. In 2009 she became the first woman and the first black professional to head up actuarial sciences in the commerce faculty's School of Management Studies.

Four weeks ago she and colleague Billy Enderstein were singled out by the Association of South African Black Actuarial Professionals (ASABA) at their ASABA/Investec Excellence Awards. UCT won the ASABA University Award on the night for its role in accelerating professional transformation, and Ramjee was there to collect it.

Like many developing countries, South Africa has too few qualified actuaries (mirroring a worldwide shortage). Fewer than 1 000 are registered here. Much of the progress in nursing black and woman actuaries through to qualification, via a rigorous and highly competitive degree, rests on a coherent - if not resolute - transformation programme with mentorship at its core.

Transformation was top of Ramjee's to-do list when she became section head four years ago -and it remains a priority.

"We have a clear strategy to guide our role in meeting transformation objectives," said Ramjee. "Our approach is integrated; we look at the students' financial, academic and psycho-social needs as well as the need for diversity in our academic staff."

They work closely with the SAADP (Ramjee is a board member) and UCT is the programme of choice for SAADP scholarship holders. In 2012 ten of the 12 first-year student chose to study at UCT.

She and Enderstein, who heads up a South African Actuarial Development Programme (SAADP) office in UCT's actuarial science department, are cornerstones of these initiatives. These encompass ASABA's mentorship programme.

This matches actuarial students with their counterparts in the marketplace. This kind of mentorship - which incorporates career awareness and networking - gives previously disadvantaged students a better understanding and more insight into the environment they will find in the workplace.

As a result, the association's own mentorship student tally grew by 80% between December 2012 and March 2013.

In the mix is the Faculty of Commerce's respected Educational Development Unit, which has offered a spread of student support since 2010.

Intake has multiplied from fewer than 10 students in 2010 to 70 in 2012, close to one-third of the overall actuarial science first-year intake.

But, as a notoriously well-paid profession, there's not a lot to attract many to frugal academia, where preparation starts for the supply chain.

Again, Ramjee is an exception. She heads a team at UCT that is "extensively involved" in the Actuarial Society of South Africa, with board and council representation.

They've also played an important role in the localisation of actuarial education. Before 2010, local actuaries obtained their qualification through the UK professional body. Since then the local profession has been able to offer its own qualification.

There is also a research path to qualification, offering students the choice of submitting a dissertation in the final stage of their professional qualification.

"This has great potential for building research and attracting people back to academia," said Ramjee.

"It also means we can teach students content that it relevant to practising in South Africa. Awareness of the local context is invaluable in developing solutions for the poor. As an example, a UK-trained actuary has very little exposure to social security, social-solidarity principles or micro-insurance."

They also participate in a sweep of teaching and learning initiatives that tap into student diversity and grow graduate competencies relevant to South Africa. Tutors and guest lecturers are appointed with an eye on diversity.

She's upbeat about ASABA's contribution to this process. The association didn't exist when Ramjee was a student at UCT.

"They play a critically important role in driving transformation in the actuarial profession - and providing a voice for black actuaries in a notoriously competitive field.

"We can't underestimate the powerful effect of role models and 'safe' spaces provided by ASABA."