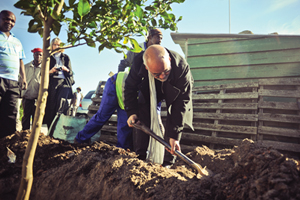 Turning earth: Professor Crain Soudien, Deputy Vice-Chancellor of UCT, pours soil around one of the lemon trees that were planted around the Emthonjeni on the official opening on 10 June. The project was envisioned to construct a public space - albeit small - through a participatory design process where people, especially women and children, could safely meet and interact.

Little besides dust drifts between the tightly-packed tin dwellings of Monwabisi Park in Khayelitsha.

The line of shacks is interrupted by a bright blue splash of open space with cheerfully painted seats and steps surrounding a single tap.

This is Emthonjeni - a ground-breaking public space that recently had its opening ceremony.

The single tap in the centre of the structure has led to this space being named as such because 'Emthonjeni' is the isiXhosa term for a water-collecting point. The name connotes more than just the literal.

Traditionally the Emthonjeni served as a water source, as well as a place of meeting, where women could watch their children could play safely.

This custom-designed public space - not bigger than the penalty area of a football field -is the result of a collaborative project that encapsulates human-centred design.

Emthonjeni is conceptualised and designed by a coalition of a UCT-led research team, representatives of the Monwabisi community, and the Sustainable Urban Neighbourhood Development (SUN) - a company that serves as the implementing agent for the City of Cape Town (CoCT)'s Violence Prevention through Urban Upgrading Programme. Other collaborators included professional consultants, architects, surveyors and engineers.

This Emthonjeni is one of five similar public spaces that were recently opened in Khayelitsha as part of CoCT's Informal Settlement Transformation Programme.

Dr Tom Sanya, a senior lecturer at UCT's School of Architecture, Planning and Geomatics who led the research team, calls the project "a product of love".

"Every single person who worked on this Emthonjeni did so with tender loving care," he says.

Community members came up with the idea in 2010 as one element of a broader Spatial Reconfiguration Plan for the upgrade of the informal settlement. Sanya and his team initiated the project in 2011, and, after extensive engagement with the community of Monwabisi, the Emthonjeni was officially opened on 10 June.

Speaking at the Emthonjeni's opening ceremony, dean of UCT's Faculty of Engineering & the Built Environment, Professor Francis Petersen, emphasised that the project was undertaken with the community, and not for the community and that this participatory approach needed to be emulated.

"This sense of equal partnership between the community and UCT was paramount to the success of this project.

"From an academic perspective, the whole issue of participatory approaches to co-design is crucial, and it can be said that the amount of learning achieved by the people involved in the project is often far greater than the benefit of the communities," the dean observed.

"People in the community are thankful to those that were involved in developing the Emthonjeni because they are now able to do laundry comfortably and the children can play cards," smiled Zandile Mahlasela, a community facilitator at SUN.

Rhoji explained that once the UCT team had consulted extensively with community representatives about the idea of an Emthonjeni, SNAC and the community discussed it and came up with a possible design.

Soudien maintained that one of the greatest benefits of the Emthonjeni was the way it championed collaborative and equal partnerships without being "patronising".

"We know that we have something to give to the people of Monwabisi, but we'd like to come to understand that relationship in a different way. We want to walk away here understanding that your commitment, your plight, your experience is also our experience."

Soudien pointed out the project provided a model of best practice, adding that the team had worked to bridge both the literal and metaphorical distances that sometimes existed between the university and different communities.

"[Sanya and his colleagues] tried to break this distance down to the point where I can sense there's a little bit of understanding of each other's contexts, of each other's situations."

As the UCT convoy trickled out of Monwabisi Park, toddlers from the area milled around in the Emthonjeni, revelling in the safe space that allowed them to simply be.