Football tournament is all about 'Ubuntu'

According to the scoreboard, West Africa had won the final 2-0, but the united festivities after the final whistle showed that everybody felt like a winner.

Four teams, each representing a geographical region in Africa, toiled and tackled in the sun to stake their claim to a resplendent golden trophy. In the end, two second-half goals for the yellow-clad West African team were enough to vanquish a game Thundasoc, which comprised an eclectic mix of players from all corners of the continent.

While the West Africa team's power and stamina proved the difference, crunching tackles - physios were called onto the pitch three times in the final - and thunderous shots from all four teams ensured that spectators could chew on more than just the post-match boerewors rolls. Southern Africa, kitted out in red, beat their green rivals from East Africa 2-1 in a lively third-place play-off.

Getting stuck into the shirt-swapping and dancing after the games was an enthusiastic deputy vice-chancellor Professor Thandabantu Nhlapo.

"I am very pleased with this, because this shows exactly the kind of spirit we are trying to create with Africa Month," remarked Nhlapo at the prize-giving.

"Ubuntu!" yelled someone from the back. 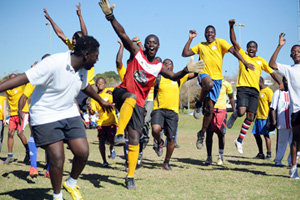 En route to cloud nine: West Africa players' joy propelled them to great heights after they won the final 2-0.

Nhlapo commended the organisers for the improved tournament this year (all four teams, each smartly kitted out, turned up) but couldn't resist a chuckle as he recalled the 2012 shenanigans.

The referee ("I don't know who paid him") had last year allowed play to continue until the team that was trailing 6-0 finally (miraculously?) found the back of the net, which sparked an explosion of joy not seen south of the Limpopo since a certain national football mistakenly thought they had qualified for the 2012 Africa Cup of Nations (the one organised by the Confederation of African Football).

Chanda Chungu, SRC societies' co-ordinator and chief organiser of the tournament, said the day was "about integration and celebrating Africa Month over a game of football".

Edward Maina, who played for Thundasoc for the second year in a row, said that last year's tournament was an "amazing" experience, and was equally pleased with the 2013 event. "It was amazing fun being there with the guys and everyone else; coming together to celebrate the fact that we are all African, in a sense."

"We are playing soccer to show the pan-African spirit that we have at UCT and are glad to have opportunity to showcase our talents," added Isaac Rugamba of the East African team.