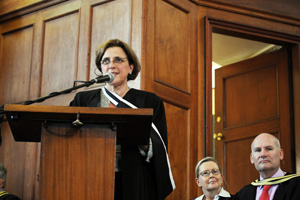 Values are crucial: Maria Ramos had some advice for graduands from UCT's Faculty of Commerce.

As hundreds of graduands from UCT's Faculty of Commerce eagerly awaited being capped and hooded on 14 December, Maria Ramos was on hand to arm them with some advice from the business end of the working world.

Ramos, the current chief executive officer of Absa group, and former group chief executive of Transnet Limited and director-general of the National Treasury, mulled over her experiences during the anti-apartheid struggle, and suggested that a look at "what it was that drove us [anti-apartheid activists]" might provide some clues to what South Africa "will be like in 20 years' time".

Citing "the values held by people like Nelson Mandela", Ramos encouraged the graduands to display courage; live with confidence - tempered with humility; think about the future; "put others ahead of yourself"; and show "compassion and unshakeable integrity". These were values, Ramos argued, that "we need to carry with us today" in the quest to improve South Africa and Africa's fortunes.

She related Xenophon's Conversations of Socrates, explaining that the legendary philosopher Socrates's view that the best occupation for a man (in 2012, thankfully, opportunities are not the sole preserve of males) was "effective action". Being effective, Ramos continued, was not about the position one held. What mattered, rather, was "what we do".

"If you want to take advantage of the opportunities that are waiting for you," Ramos told the graduands, "you need to take effective participation." She warned that social ills such as "discrimination, corruption, xenophobia and disregard for other people" would entrench themselves in society if those with the opportunity to fight them decided to turn a blind eye.