New study on TB vaccine for newborns of HIV-positive mothers 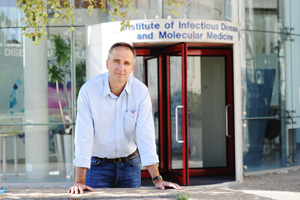 Safeguard: UCT's Assoc Prof Mark Hatherill is leading a study that will test the safety and immunogenicity of a new TB vaccine, MVA85A, on newborns of HIV-positive mothers.

UCT's South African Tuberculosis Vaccine Initiative (SATVI) and Stellenbosch's Desmond Tutu TB Centre have begun recruiting infants for a study to test a new TB vaccine, MVA85A, for newborns of HIV-positive moms. The MVA85A vaccine, developed by Oxford University, has already been successfully tested for safety in healthy adults, children, and in HIV positive adults. This will be the first new TB vaccine to be tested specifically for newborn babies of HIV-positive mothers.

The current TB vaccine, BCG, protects children against the most severe forms of TB like meningitis, but not against lung TB, which is the most common form of the disease. Lung TB in adults is mainly responsible for the spread of TB infection to other people. The World Health Organisation (WHO) estimates that South Africa, where BCG is given routinely at birth, has the highest rate of new TB cases in the world. Moreover, although BCG has been used for more than 90 years and has proved safe for almost all children, BCG vaccination can lead to complications in HIV-infected babies.

TB vaccine researchers have been searching for a better TB vaccine that is more effective than BCG, but that is also safe for all newborn babies, including those with HIV.

"If this MVA85A vaccine study is successful, it will benefit in particular those babies at risk of HIV infection, who are also at high risk of getting TB," said UCT's Associate Professor Mark Hatherill, who is leading the study.

The researchers plan to enrol 340 newborn infants of HIV positive moms at antenatal clinics in Worcester and Cape Town. Half of the babies will be given the MVA85A vaccine at birth, and the other half an inactive placebo. Babies who test negative for HIV will also be given BCG two months later. All babies in the study will be monitored closely over a period of one year, to test whether the MVA85A vaccine is safe, and whether it improves immune responses to TB.

This study is the first step towards testing whether MVA85A vaccination of newborns can help protect children against TB later in life.

"Participation of the community in our studies is essential, and we are grateful for the ongoing support of the Boland community for TB vaccine studies over the last 12 years," said Hatherill.

The Wellcome Trust, the Medical Research Council in the UK and the UK's Department of International Development (DFID) are the main funders of this SATVI---led study, which is a collaboration between UCT, Stellenbosch University, the University of Oxford, and the Oxford--Emergent Tuberculosis Consortium (OETC), a joint venture between Emergent BioSolutions and Oxford University, where the MVA85A vaccine was originally developed. It is anticipated that the results of this study will be available in 2015.
Ongoing clinical trials of MVA85A vaccine are also being supported by the European Developing Countries Clinical Trials Partnership, the UK MRC, Wellcome Trust, the OETC, and non-profit organisations Aeras.