Major grant for research on HIV-1 and contraception 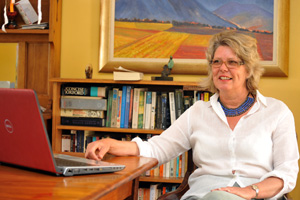 New insights: Prof Janet Hapgood's research into the effects of progestins on HIV-1 infectivity is being supported by a Grand Challenges Explorations grant, an initiative funded by the Bill & Melinda Gates Foundation.

Professor Janet Hapgood of the Department of Molecular and Cell Biology has received a US$100,000 Grand Challenges Explorations (GCE) grant, an initiative funded by the Bill & Melinda Gates Foundation. She will pursue an innovative global health and development research project, titled Determination of Differential Effects of Progestins on HIV-1 Infectivity: Towards choice of progestin for contraception in high-risk developing countries.

GCE funds individuals worldwide who are taking innovative approaches to some of the world's toughest and most persistent global health and development challenges. Hapgood's project is one of more than 80 GCE Round 9 grants announced in November by the Bill & Melinda Gates Foundation.

The choice of contraceptive for young women is a particularly important decision. This choice is complicated by controversial clinical findings that some contraceptives significantly increase susceptibility to HIV-1 infection. Thus a crucial health policy issue is to find the best possible method of contraception that most effectively balances risks with health benefits in these regions.

Contraceptives can be administered in many different forms, including as injectable compounds, orally, as patches on the skin, and in the form of long-acting intra-uterine devices. The actual hormones used, which include synthetic derivatives of the natural hormone progesterone, also vary widely in different types of contraceptives. The research project proposed by Hapgood aims to provide insight as to which is the safest progesterone derivative for contraceptive use by women in high risk areas for HIV-1 infection.

Contraceptive hormones act by binding to special 'receivers' or receptors inside the cell. These receptors then determine the subsequent actions of the hormone. The proposal is based on findings from Hapgood's group that different contraceptive hormones used in sub-Saharan Africa bind to different subsets of receptors inside the cell to result in differences in the way the cells can mount a defence against the HIV-1 virus.

Hapgood proposes that this may result in some - but not other - contraceptives actually lowering the ability of the body to defend itself against the virus. The project involves using human cervical cells from voluntary donors and manipulating them in the laboratory, by adding the virus and contraceptives and then measuring markers of the cells' defence mechanisms, as well as markers of viral infectivity. The results will be clinically relevant and suggest which contraceptives will pose the least possible risk of increasing HIV-1 infection.