Students get with the program 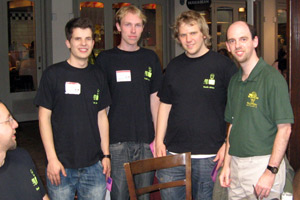 That made it nine wins for UCT over the past 10 years, and two in two years for this trio.

The triumph has earned the team a place at their second consecutive World Finals, after competing in Warsaw, Poland, earlier this year. They will now be one of 100 teams from around the globe who will vie for the 2013 title in St Petersburg, Russia.

The UCT students will be joined for the trip by UCT coach and site director Dr Bruce Merry, a postdoctoral research fellow in the Department of Computer Science and a veteran of previous AMC-ICPC finals.

While 19 teams - 10 from UCT, five from Stellenbosch University and four from the University of the Western Cape - took part in the event hosted at UCT, affiliated African qualifiers were also held in Grahamstown, Pietermaritzburg and Pretoria, as well as in Benin and Nigeria. The AMC-ICPC is a worldwide event sponsored by IBM in which teams of three compete to see who can solve programming problems the fastest.