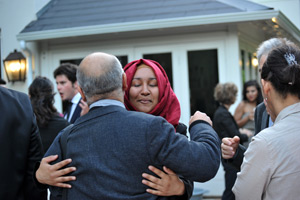 UCT's Students' Representative Council (SRC) 2011/2012 was rewarded for their year's hard work with a braai at the Vice-Chancellor's residence on 16 October.

The outgoing student leaders, due to vacate their posts at the end of October, were thanked for their service to the university by VC Dr Max Price. He assured the students that their experiences in office would serve them in good stead throughout their careers.

"You've had some very significant achievements," said Price. "Many of you have been effective representatives of the student constituency on the committees you've served on."

SRC president for 2011/2012 Insaaf Isaacs hailed her colleagues for their efforts over what she described as a challenging year.

"It definitely hasn't been an easy year," said Isaacs. "It's been a year of a lot of personal growth and development and many challenges. The SRC of 2013 will have big shoes to fill."