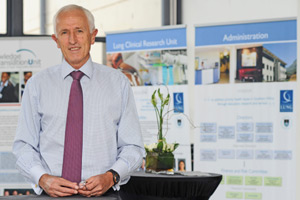 A professor of respiratory medicine at UCT and head of the Division of Pulmonology at Groote Schuur Hospital, Bateman was honoured for his international contribution to improving the lives of people with respiratory diseases.

According to ERS, the largest international professional society in the field of respiratory medicine, the award is in recognition of Bateman's contributions through his research and many international collaborations. "He has been a key contributor in building bridges between ERS, the World Health Organisation and the American Thoracic Society, and ensuring that respiratory medicine and care is taken into consideration in policy worldwide," read an ERS statement.

The award was made at the ERS annual congress in Vienna, Austria, in September, which was attended by approximately 23,000 delegates.