Scholars explore the personal and political at Holocaust conference 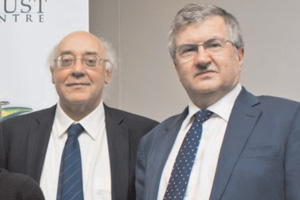 Not in denial: Prof Milton Shain, director of the Kaplan Centre, with Sir Richard Evans.

Over a dozen leading scholars in the field of Holocaust studies explored Holocaust historiography and their personal place within the field during a three-day conference hosted in August by UCT's Isaac and Jessie Kaplan Centre for Jewish Studies & Research, in association with the South African Holocaust & Genocide Foundation.

Under the theme Holocaust Scholarship: Personal Trajectories and Professional Interpretations, scholars inserted their own biographies into their work in the wake of decades of research and reflection. Among the luminaries was Christopher Browning - renowned for his work on the evolution of the 'Final Solution' as well as the behaviour of "ordinary men" during war - and Sir Richard Evans, regius professor of history at Cambridge University.

Almost all the participants had been guests of the Kaplan Centre sometime or the other over the past 15 years, where they had taught both undergraduate and postgraduate students. Director of the Centre, Professor Milton Shain, explained that having been exposed over the years to UCT students, it was time for these scholars to engage with one another on changes and trajectories within the field.

In his keynote address, Evans reflected on his role as expert witness in the famous David Irving versus Penguin Books and Deborah Lipstadt trial - in which Irving had sued the publishers and Lipstadt who, in her book Denying the Holocaust, had called him a Holocaust denier - in London in 2000.

As Evans explained in Lying about Hitler, his book on the trial, historical scholarship can "reach reasoned conclusions about the Nazi extermination of the Jews on the basis of a careful examination of the written evidence".