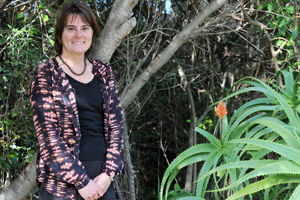 Technological bent: Dr Lisa Seymour is the first woman to head up the Department of Information Systems.

Alumna Dr Lisa Seymour (44), who first joined UCT as a science student back in the 1980s, is the first woman to head up an IS department at UCT. This follows her promotion to Head of the Department of Information Systems.

Seymour considers herself lucky to be part of a solid group of academics and administrative staff, and sees her role as one of supporting and motivating her team. As the first woman to head up an IS department at UCT, she says it is possible that women have the edge in the softer skills of leadership as opposed to the predominant task orientation of many male leaders.

Seymour has inherited one of the most entrepreneurial departments at UCT; recent coups include the multi-million-rand sponsorship of the Samsung Mobile Innovation Lab, it is home to UCT's carbon footprint research through Green IS, and has launched the Postgraduate Diploma for Business and Systems Analysts.

Most of Seymour's adult life has been spent on campus, and her journey to the top of the department has been built on a love of innovation and technology. When her high school didn't offer computer studies, she trekked to another school to take it as a seventh matric subject.

It was during her honours year that Seymour's flair for technology came to the fore, as she developed computational molecular models - she was ahead of her time. She learned the hard way, installing all the software herself.

During her doctoral studies, this strong technological bent was evident. She studied the stability of emulsions used in the explosives industry, and developed a computer model that had a practical application in gold mines.

During the course of her PhD she joined the Information Technology Services Department at UCT, and many will remember her as the training manager for SAP, where she gained first-hand experience about the challenges of human resistance to technological change.

Seymour is a research associate of the Centre for IT and National Development in Africa (CITANDA).

Her life-long fascination with the confluence of technology, people and processes is reflected by Google Scholar, where more than 70 citations of her papers have been recorded.

"In my teaching I strive for relevance. IS is a very practically focused discipline, grounded in the profession, so it's critical that we are always up to date with what happens in practice."