Researchers must "excite and invite" officials and the public 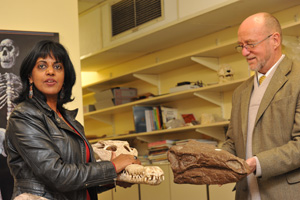 Bone to pick: Prof Anusuya Chinsamy-Turan with Derek Hanekom, deputy minister of science and technology, during the latter's recent visit.

Derek Hanekom, deputy minister for science and technology, on a recent visit to the palaeobiology lab at UCT's Department of Zoology urged palaeoscientists to be proactive in exposing decision-makers, like him, to their work.

Hanekom was at UCT to meet with Professor Anusuya Chinsamy-Turan, head of the Department of Zoology; Professor Danie Visser, deputy vice-chancellor responsible for research; and Professor Anton le Roex, dean of science. Also at the meeting were Professor Judy Sealy of the Department of Archaeology, archaeologist Associate Professor Becky Ackerman, geologist Dr John Compton and forensic anthropologist Alan Morris, all part of the UCT palaeoscience group.

According to Hanekom, the South African government recognises South Africa's geographic advantage in the palaeosciences, which is evidenced by Cabinet's approval of the South African Strategy for Palaeosciences this year. The aim of the strategy is to develop the discipline through the building of human capital, resource support and to engage the public on all spheres of the field, among other goals.

Hanekom maintained that the onus is on the researchers to "excite and invite" governmental stakeholders and the public about the work they do. He also advised them to engage officials and the broader public on media platforms that they are currently using, like Twitter and Facebook.

Chinsamy-Turan thought Hanekom's visit was a good opportunity "for him to hear about our work and some of the constraints that hinder our progress".