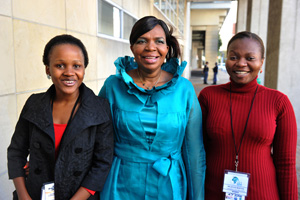 One of the perks of being selected for a prestigious international scholarship is that you get to travel the world, and two UCT students took full advantage recently.

In May, Maletsabisa Molapo, a master's student in the university's Centre in ICT for Development, and Joyce Mwangama, a doctoral student in electrical engineering, were named as recipients of the Google Anita Borg Memorial Scholarships for 2012. A month later, the two were treated to a retreat at the online search engine's Zurich offices from 18 to 20 June.

Molapo and Mwangama were part of the group of 70 young women from the US, Canada, Europe and Africa (or the Middle East) to have the received the scholarships this year.

Between the Google product talks and panel discussions (doctoral candidate Mwangama's favourite was a presentation on whether to go into academia or industry after completing a PhD) they toured Google's famed offices, which Mwangama described as more like "a playground than a place of work".

"I was happy to meet many new friends, and interact with many of the Google engineers at the retreat," she said.

The scholarship is named after the renowned computer scientist and founder of the now-named Anita Borg Institute for Women and Technology, based in California in the US.