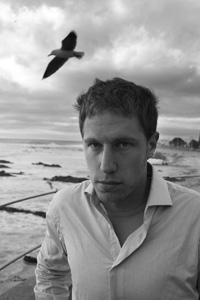 In picture: Photographer Mikhael Subotzky showcased his work at the National Arts Festival in Grahamstown after winning the 2012 Standard Bank Young Artist Award for Visual Arts.

Subotzky, a graduate from the Michaelis School of Fine Art, joins a long list of UCT staff and alumni who have picked up Young Artist Awards in this and other categories. Past winners include Professors Gavin Younge (in 1986) and Pippa Skotnes (1993), both now at Michaelis, Associate Professor Geoff Hyland of the Department of Drama (1997), as well as Lara Foot Newton (1996), director of the Baxter Theatre Centre.

Alumni who have been recipients of the award include actor Richard E Grant, who won an inaugural award in 1981, theatre director Janice Honeyman (1982) and fine artist Nandipha Mntambo (2011).

Subotzky's Grahamstown exhibition, titled Retinal Shift, investigates the "practice and mechanics of looking in relation to the histories of Grahamstown as well as of photographic devices", and Subotzky's own history.