"Be proud of being African" 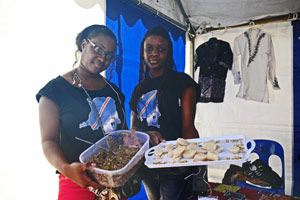 Perhaps it is a bit too easy - as some would charge - to forget that the Cape Town bubble is actually as African as, well, anywhere else in Africa.

Thus, when UCT's international student societies exhibited their goods on Upper Campus's Jameson Plaza on 15 May, it was an ideal opportunity to learn more about the continent.

The famous plaza was brought to life as the Students' Representative Council (SRC)-organised event saw a colourful ensemble of traditional clothing, delicious foods and music from all corners of Africa delight the senses of students and staff. There was even an 'intellectual centre' where passers-by could dig deeper into the continent's history with an assortment of literature and films on offer.

SRC vice-president external, Mike Ramothwala, says the event was designed to create a consciousness of people's African heritage, "so that we can make people proud of being African".