'Winters they are a-changin' 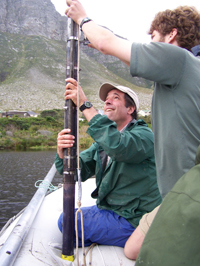 If in the past the Western Cape in winter has been compared to a baby (wet and windy), findings by an team of researchers from UCT, the University of the Free State and two American universities suggests that locals may have to coin another joke.

The scientists '“ which include Professor Michael Meadows of UCT's Department of Environmental and Geographical Science '“ have literary dug into the region's recent geological past to uncover new insights into the climatic future of the region. Their work, funded by the National Science Foundation in the US and published last week in the open-access journal Climate of the Past, used sediment cores from Verlorenvlei, an elongated former estuary at Eland's Bay along the West Coast, coupled with ice-core data from Antarctica.

They used this to reconstruct the history of lake level fluctuations over the past 1800 years that, in turn, illustrate past rainfall regimes in the region.

What they found supports an unsettling conclusion that sophisticated climate models have been suggesting for the future of this already water-scarce corner of the world. As the planet warms due to build-ups of heat-trapping greenhouse gases, winter rainfall is likely to become scarcer as well. The central player in this story is the meandering belt of westerly winds that circles Antarctica and brings rainstorms to the Cape in winter. The belt shifts its position closer to or farther from Antarctica with the seasons; cooler months drive it farther north over the Cape, carrying the life-giving rains with it, and warmer summer months draw it offshore where the rainstorms can no longer strike land.

The research shows that rainfall increased dramatically at Verlorenvlei during a natural cool period observed globally and known as the Little Ice Age '“ roughly 700 to 200 years ago. This association of higher rainfall with cooling is consistent with an anticipated link between future temperatures and the position of the westerlies, in which models suggest that global warming can have the opposite effect on local rainfall and essentially drive it away from the African mainland.

Such a poleward shift of the westerlies could also enhance the flow of the coastal Agulhas Current around the Cape and thereby disrupt sea surface temperatures and weather patterns in the Atlantic and Indian Ocean basins.

"There's a lot more to greenhouse gas build-ups than temperature alone," Stager added. "These drought-sensitive regions of the southern temperate zone are among the most vulnerable to global climate change, thanks to this link with the westerlies."

UCT's Meadows adds that the unique, diverse fynbos flora of the Cape could be severely impacted.

"These plants are tough," he said, "and they are already used to dry conditions. But further aridity could make fires more frequent as well, which could damage the soils and make it even harder for the native plants to survive here.

"Unfortunately, this is their only native habitat, so such a change here might eventually threaten their very existence."

The lake itself is a protected area and regarded as an extremely important site for nature conservation, not least for its prolific birdlife, adds Meadows.