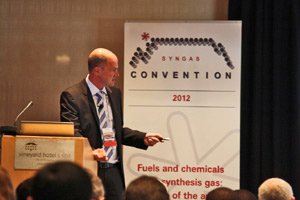 A first-of-its-kind convention dedicated to synthesis gas conversion - one of the key industrial technologies underpinning the South African economy - took place in Cape Town this April. The event was hosted by c*change, the Department of Science and Technology and the National Research Foundation's Centre of Excellence in Catalysis at UCT, in association with Sasol, PetroSA and other sponsors.

South Africa is a world leader in the field of synthesis gas technology, a catalytic process that involves the conversion of coal or gas to liquid fuels and other chemicals. The technology, known as the Fischer-Tropsch process, provides 40% of South Africa's current liquid fuels requirements from coal and natural gas.

And as oil reserves dwindle and the world looks for greater diversity and security of energy supply, opportunities are opening up to deliver these same benefits to others.

"The world is particularly interested in gas-to-liquid [GTL] opportunities inherent in the technology," said Professor Michael Claeys, director of c*change. Using gas instead of coal in the process, he added, improves carbon efficiencies by up to 10%.