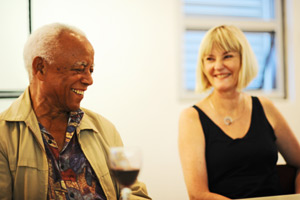 His work and life's legacy is widely celebrated, but who's the man behind UCT's Professor Neville Alexander? Few knew the inner workings of this acclaimed linguist and anti-apartheid struggle veteran - he's fiercely private and humble - until now.

The launch of Glimpses of a Life: Neville Alexander, a documentary film by local filmmaker Nicki Westcott, in March lifted the veil from a man well worth talking about.

The event was hosted by the Centre for African Studies, the Centre for Curating the Archive, and the Project for the Study of Alternative Education in South Africa. The half-hour documentary is part of an umbrella project by Westcott titled Conversations with Remarkable Africans.

Speaking at the launch, deputy vice-chancellor Professor Crain Soudien said that the documentary was not just about Alexander, but about a bigger set of messages that need to be surfaced and used to understand the immense puzzle of what it means to be a human being in South Africa. "He represents this individual experiment of what we are all trying to come to terms with," Soudien said. "He attempts to speak to those things that we are all afraid to articulate."

Glimpses of a Life: Neville Alexander can be purchased from Westcott at Westcott.

Details of further public talks, launches and exhibitions hosted by the Centre for African Studies can be found on their Facebook page.