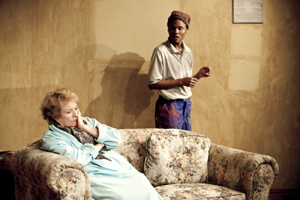 Foot, CEO and director of the Baxter Theatre Centre, scooped a half dozen nominations for her 2011 production, a play that also marked Dame Janet Suzman's first return to the South African stage as a performer in 35 years.

But it wasn't Foot alone that flew the UCT colours at the awards.

Director of the Little Theatre, Associate Professor Christopher Weare, was honoured with a lifetime achievement award for his contribution to South African theatre.