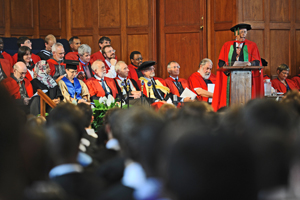 Carry on, doctors: Dr David Potter was one of the recipients of an honorary doctorate degree in December. This year, seven more honorary degrees will be awarded.

UCT will award no fewer than seven honorary degrees this year, the recipients drawn from the arts, economics, laws, medicine and science.

Artist Marlene Dumas will receive a Doctor of Fine Arts degree. Widely regarded as one of the most influential painters working today, Dumas has continuously explored the complex range of human emotions. Born in Cape Town, she obtained a fine arts degree from UCT's Michaelis School of Fine Art before continuing her studies in the Netherlands. Her work appears in collections in many countries, including South Africa, the US, Japan and across Europe.

British theoretical physicist Jonathan Ellis, hailed as one of the pioneers working at the interface between particle physics, astrophysics, cosmology and quantum gravity, will receive a Doctor of Science degree. Ellis - who in 1976 proposed techniques to find the elementary particular gluon - spent much of his scholarly career with the European Centre for Nuclear Research. Currently the Clerk Maxwell Professor of Theoretical Physics at King's College London, he has also made substantial contributions to physics in South Africa.

Allan Gray, the founder of Allan Gray Limited, the largest privately owned investment management firm in Southern Africa, will receive a Doctor of Economic Science degree. Educated at Rhodes and Harvard, where he obtained an MBA, Gray has been described as arguably the most successful self-made South African business executive. A philanthropist who has consistently supported higher education in South Africa, he is renowned for his pioneering approach to investment.

Nicholas Haysom, who will be awarded a Doctor of Law degree, is a leading expert on constitutional processes and conflict resolution. A UCT law graduate, Haysom was directly involved as both a negotiator and an advisor in the negotiation of South Africa's interim and final constitutions. He served as then President Nelson Mandela's legal advisor, and in 2007 was appointed as political director in the executive office of the United Nations Secretary-General, advising on missions around the globe.

Basil Jones and Adrian Kohler of the Handspring Puppet Company will receive Doctor of Literature degrees, recognising their outstanding contributions to contemporary theatre. Both graduated from the Michaelis School of Fine Art at UCT in 1974, and established the company, along with two other graduates, in 1981. Handspring has since become one of the best known and respected puppet companies in the world, their collaboration with, among others, the Royal National Theatre's Warhorse project winning international acclaim.

Born in South Africa and trained in Zimbabwe, David Sanders is an iconic figure in public health and will be presented with a Doctor of Science in Medicine degree. Sanders' work has helped shape primary health care locally and internationally. Based at the University of the Western Cape, where he established South Africa's first and much-mimicked multidisciplinary master's programme in public health, he works on policy and service issues with national and international organisations, including the WHO and Save the Children.