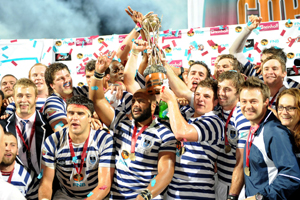 UCT's Ikey Tigers will begin their FNB Varsity Cup title defence this evening when they take on the University of Free State's Shimlas at UCT.

The match kicks off at 17h00, and will also be televised on SuperSport.

But this year's Varsity Cup comes with a few innovations. In addition to tightening up on the movement of players between campuses and teams, the organisers have also introduced a new scoring system.

In a bid to encourage running, try-orientated rugby, the value of some the kicks has been reduced. This year, free kicks and drop kicks will count just two points apiece.

More interestingly, a conversion will now be worth all of three points.

The Ikeys' coach, Kevin Foote, believes this will favour his side, which has earned a reputation for its free-flowing, try-scoring approach. But it also means the other players will have to work that much harder to assist the competition's top scorer in 2011, UCT flyhalf Demetri Catrakilis, when they do touch down, says Foote.

"It just means you've got to score your tries as close to under the poles as you can just to make his job a bit easier."

Foote is upbeat about his team's chances in the game against Shimlas, a side over which they've had the upper hand. UCT trounced the Bloemfontein side by 57-20 in last year's semi-final, beat them 26-10 in the season opener, and got the better of them in the 2010 semis as well, if not so convincingly.

And after a few decent friendlies, his players - under new skipper Ntsolo Setlaba - are raring to start their title defence, reports Foote. Even if, as usual with the seasonal change of squads, the sides are unfamiliar with each other.

"The guys are just hungry to go now," he says.

The Tigers will be on the road for their next three games - against the University of Johannesburg, the Tshwane University of Technology and the Nelson Mandela Metropolitan University - and will return to UCT on 5 March for their match against North-West University. See full fixtures on the Varsity Cup site.

Watch the video of last year's celebrations on Upper Campus when the Ikey Tigers won the 2011 chanpionship.