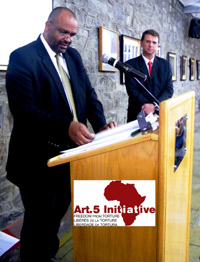 Cracking down: Justice Vincent Saldanha speaks at the launch of the Article 5 Initiative; at the back is UWC's Lukas Muntingh.

Despite a global ban, torture remains a scourge in many parts of the world, including Africa.

The launch of the Article 5 Initiative (A5I) in South Africa on 13 December 2011, following International Human Rights Day on 10 December, is a step in the right direction, an attempt to eradicate torture in six post-conflict African countries, namely Burundi, Kenya, Mozambique, Rwanda, South Africa and Uganda.

The three-year project aims to build capacity at African institutions to improve domestic compliance with, especially, the United Nations Convention against Torture and the African Charter on Human and People's Rights. The A5I is a partnership between the Gender, Health and Justice Research Unit at UCT, the Community Law Centre's Civil Society Prison Reform Initiative at the University of the Western Cape, the Human Rights Implementation Centre, University of Bristol, UK, and the African Policing Civilian Oversight Forum.