World stage premiere of Coetzee's Waiting for the Barbarians 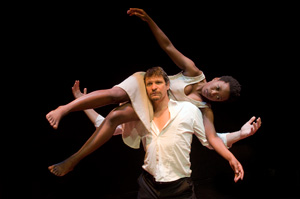 Carrying on: Chuma Sopotela and Grant Swanby appear in the stage adaptation of JM Coetzee's Waiting for the Barbarians

The world stage premiere of South African-born Nobel laureate JM Coetzee's novel Waiting for the Barbarians, adapted for the stage and directed by Alexandre 'Sasha' Marine, will take place at the Baxter Golden Arrow Studio, for two weeks only, from 16 August to 1 September nightly at 19h00.

In a dramatic coup for the Baxter, Coetzee's most celebrated novel will be performed as a stage play for the first time, produced by Maurice Podbrey of Mopo Productions. It features a stellar local line-up of eight actors led by Grant Swanby with Nicholas Pauling, Chuma Sopotela, Owen Manamela-Mogane, Chi Mhende, Alistair Moulton Black, Ruben Engel and Anele Situlweni. Set and costume design is by Craig Leo and the musical score is by Dmitri Marine.

Coetzee, who was born in Cape Town, taught at UCT. In 2002 he emigrated to Australia, and he won the Nobel Prize for Literature in 2003.

Waiting for the Barbarians is his third novel; it was first published in 1980, and was chosen by Penguin as one of the Great Books of the 20th Century.

Waiting for the Barbarians carries an age restriction of 14 years. The play previews at the Baxter Golden Arrow Studio on 16 and 17 August, opens on 18 August and runs until 1 September.