The Faculty of Commerce hosted the first of UCT's two graduation ceremonies scheduled for today, 13 December.

This morning diplomates from the faculty's Postgraduate Diploma in Accounting, as well as graduands from a selection of master's and doctoral programmes, drew a ceremonial close to their studies.

A few other highlights paved the way for these celebrations, however. Among these, the university's Social Responsiveness Award was presented, in absentia, to Associate Professor Ralph Hamann of the Graduate School of Business. Hamann was honoured for his work on the Food Lab initiative, which brings together different role players in the regional food system to find innovative solutions to food security problems. 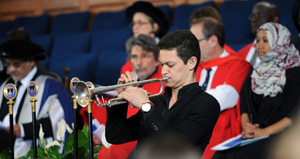 Notable: Darren English performed the first jazz piece to be heard at a UCT graduation ceremony.

But before that trumpeter and honours graduand - he dons his graduation gown on Thursday, 15 December - Darren English became the first musician to perform a jazz piece at a UCT graduation ceremony. English recently became a pioneer of another kind when he was awarded perfect scores for his two recitals, the first student from the university's South African College of Music to manage the feat.

This afternoon at 15h00, the Faculties of Science and Engineering & the Built Environment will co-host a ceremony. Here, Dr David Potter will receive an honorary doctorate in engineering science, while Professor George Janelidze and Professor Hans-Peter Kunzi will be welcomed as members of UCT's College of Fellows.