The GSB is once again the pick of the African bunch | The UCT librarian says her farewells (sort of) | UCT computer scientist is hailed as a pioneer | Students are green with invention.

UCT's Graduate School of Business (GSB) has, again, been voted the top business school in Africa. This time the acclaim came at the 4th Eduniversal World Convention, held in Shanghai, China, from 13 to 15 October. A vote by deans from the 153 countries that make up the Eduniversal System - 75% of them cast their ballots - named the GSB the continent's leading business school for the fourth year in a row. The Stellenbosch University business school came in third, and the American University in Cairo second. Business school leaders from more than 50 countries attended the gathering, hosted by the city's Tongji University School of Economics and Management. 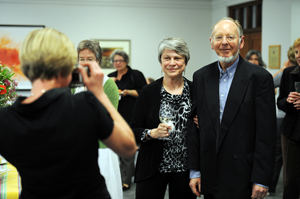 Joan Rapp has been credited with leading UCT Libraries into the 21st century. It was no walk in the park, as underlined by both vice-chancellor Dr Max Price and Emeritus Prof Martin West (in picture with Rapp), the former deputy vice-chancellor who appointed Rapp as the Libraries' executive director in 1998, at Rapp's farewell do on 17 October. It's a job that involved remaking the system physically and structurally - bulking up on space, taking the service online, digitising its rare treasures, and assimilating the many "fugitive" departmental libraries, among other tasks. With all that in place, the university understandably wants to make sure the transition from the 'Rapp era' to the 'post-Rapp era' (as West had it) runs smoothly. So while she officially retires at the end of October, Rapp will stay on till the end of August 2012 to assist with the handover to her successor, Gwenda Thomas, who takes office on 1 November this year. "It was the people and not the things that counted," Rapp says of her time at UCT. 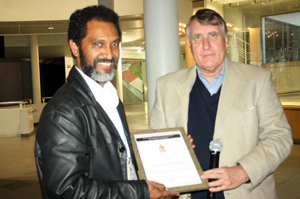 UCT's Prof Ken MacGregor received the Pioneers Award from the South African Institute for Computer Scientists and Information Technologists (SAICSIT) at the institute's annual conference in Cape Town in October. MacGregor will retire this year after spending 40 years building the UCT's Department of Computer Science into one of the finest in the world. He was head of the department for 29 years. Two Pioneer Awards, which recognises individuals who have played pioneering roles in promoting computing in South Africa, were presented, both to UCT-affiliated computer scientists. Honorary Prof Judith Bishop, currently head of computer science in external research at Microsoft USA, won the second award. In picture, MacGregor (right) receives the award from Assoc Prof Irwin Brown of UCT's Department of Information Systems, who is also president of SAICSIT. 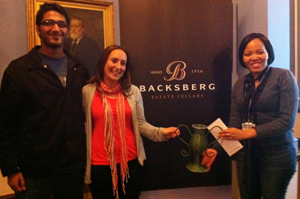 A group of green-minded UCT students won the 2011 GCI-Backsberg Sustainability Award for their work on a food waste biogas digester at Green Campus Initiative's (GCI) awards. The 10-strong group oversaw the installation of the fully operational machine at the Leo Marquad residence earlier this year. The biogas digester currently generates 1.5 hours' worth of cooking gas, in the form of methane, from 20kg of food waste. Judges commended the way the project addressed a number of issues, including energy, waste, climate change and education. The award carried a R2 000 prize, sponsored by the Backsberg Wine Estate. The award was made during the GCI's recent Green Week. In picture are Gokul Nair of UCT's Committee of Residence Catering Representatives, Jenny Back of Backsberg and team leader Rethabile Melamu.