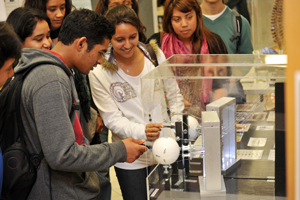 An eyeful: A group's eye-catching design of an opthalmotrope won them top prize at the Faculty of Health Sciences' Undergraduate Research Day.

Some impressive research projects were on display when the UCT Faculty of Health Sciences hosted its annual Undergraduate Research Day on Thursday, 13 October.

Undergraduate students presented the fruits of their toil to classmates, lecturers and a panel of judges who provided valuable feedback.

Jason Master scooped top prize in the oral presentation section for his review of patients with confirmed 22q Deletion Syndrome, a chromosomal disorder characterised by heart defects, growth delays and a range of other conditions, at Red Cross Children's Hospital.

A three-person team came second for their investigation of mutations in a gene in the Kaposi's sarcoma-associated herpes virus (KSHV), which is a known human cancer virus.

The final podium spot went to a group's study of the differences in recovery patterns between male and female runners after an ultra-marathon race.

Braam Beyer, Nathan English, Liesl Fourie and Vanessa Konje saw their plans for building an opthalmotrope, a mechanical model that displays how the six extrinsic muscles of the eye along with various anatomical support structures enable eye movement, clinch first prize in the poster presentation section.

Cassandra Bruce-Brand was second for her review of endoscopic medial maxillectomy for inverting papilloma, which concluded that traditional methods of nailing together fractured bones in the leg could lead to complications such as infection, infarction and non-union of the affected bones.

Third-place went to a trio that conducted a 12-month follow-up study of a cohort of general in-patients at Groote Schuur Hospital. They researched mortality and readmission rates, functional outcome and employment status among the patients.