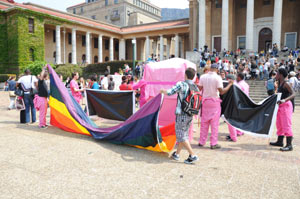 The campaign will also inform the university community about support and resources available, both on and off campus.

RainbowUCT is a student organisation that works to promote sexual diversity and human rights.

Last year's Pink Week was marred by the burning of the "Closet", a symbolic closet placed on Jameson Plaza to highlight human rights violations such as prejudice and discrimination against the gay community. This year RainbowUCT will reintroduce the campaign during Pink Week to measure whether attitudes towards the LGBTIQ community have changed, especially in the light of homophobic incidents worldwide.

These include measures to institute capital punishment in Uganda and the recent spate of "corrective" rapes of lesbians in South Africa's informal settlements.

The launch of Pink Week and the "Closet" ribbon-cutting ceremony will take place on Monday 10 October at 13h00 on the Jameson Plaza.