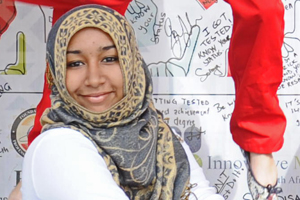 Hot seat: Insaaf Issacs has been chosen as the new SRC president, becoming the third female student to hold the position in the past six years.

Experience and continuity seems to have guided the seat allocations of UCT's 2011/2012 Students' Representative Council (SRC), as re-elected candidates have been named for the group's senior positions.

Insaaf Issacs of the South African Student Congress (SASCO), the current chair of academics, has been named as the new president, and her SASCO colleague Mike Ramothwala, the 2010/2011 media and communications officer, has been chosen as the vice-president: external. Also, Independent candidate Alexander Spoor, now responsible for societies, is the new deputy secretary-general. Siya Songca (independent), who received the most votes, has been handed the portfolio of vice-president: internal, and SASCO's Basani Mkhize is the new secretary-general.

This comes in the wake of SASCO's defeat of the Democratic Alliance Student Organisation (DASO) in the recent elections, winning seven seats to DASO's three of the 17 available. (Last year, DASO won six to SASCO's five seats). It's a political battle fought on many fronts. SASCO also took the SRC elections from the Pan African Student Movement of Azania at the University of the Western Cape, while DASO trumped SASCO at the Nelson Mandela Metropolitan University.

With seats in the committee increased from 15 to 17 this year, a new portfolio, services and labour, given to SASCO's Kabelo Pule, has been created. And the academics portfolio has been split into two, undergraduate and postgraduate, which went to SASCO members Fadzai Chitiyo and Ali Kiyaei, respectively. Fundraising duties have been added to the entertainment portfolio, which has gone to SASCO's Muhammad Motala.

The new committee takes office on 1 November. October will serve as handover and induction period.