SRC voting picks up pace as the deadline looms 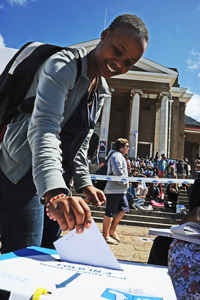 Make your mark: Sithembile Cele casts her vote in the SRC elections.

Over the meridian on Friday, the last day of voting for the 2011/2012 Students' Representative Council (SRC) elections, election assistants had to keep their wits about them.

That's because many students were still making last-minute dashes to the voting stations to cast their ballots before the polls closed. And the voters, too, had plenty to think about.

Firstly, each student could vote for up to 11 candidates this year. That's one up from the previous 10, out of consideration for the two extra posts on the new executive committee.

And then were many more faces to choose from on this year's ballot form. No fewer than 40 candidates stood for the 17 positions up for grabs on the SRC.

The election office is still pulling out all the stops to attract as many students as possible to the polls. Voting stations at residences will be open from 18h00 to 21h00 tonight, and students can also vote electronically on Vula until 20h00.

Morris Manuel, logistics officer for the SRC, reports that students have made substantial inroads into the 7 000 ballots printed for the election. That would suggest that there's every chance that the voter turnout will again be around the 40% mark that's become standard for SRC elections over the past few years.

As per schedule, ballots will be counted tomorrow. Results could, fingers crossed, be released as early as Saturday evening.