Recovery is still a little way off - Maria Ramos 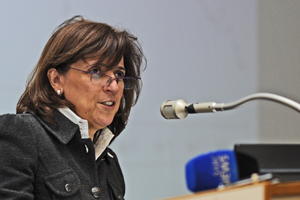 Troubled waters: Recovery from the global financial crisis has come in fits and starts, said Maria Ramos at a recent talk at UCT. (Listen to a pod cast).

If there's no master plan to pull the world economy, Phoenix-like, out of the embers of a still-smoking recession, it could be because the financial world is somewhat at sea.

"It's difficult to talk about the state of the economy and the way forward because at this stage, I think, all of us have many more questions than we actually have answers for," said Maria Ramos, group chief executive of the Absa Group, at a talk hosted by UCT's School of Economics in September. "All we know is that there is a significant amount of uncertainty out there."

As a result, there is plenty of volatility in the markets, and in response, said Ramos, investors are bulking up on safer assets. Surprisingly popular now are American Treasuries (the US's debt-financing instruments, such as Treasury bills and bonds); this despite the recent downgrading of the US's credit rating to AA-plus, one point off the top-tier AAA that it had since 1941.

There's also trouble brewing in the European Community. Greece, Ireland and Portugal are in deep financial waters, but even more worrying are the looming crises in the larger economies of Italy and Spain, reported Ramos.

If there is good news, it's that emerging markets like those of China, South Korea and India are playing a more important role. And even though South Africa's wagon is well and truly hitched to the global economy, the country has been able to weather the financial storms better than most, explained Ramos, thanks to its sound fiscal policies - the country's debt-to-GDP ratio stands at about 30%, well below that of the US or some EU nations - and a growth in the range of what it's exporting and who it's exporting to, among other factors.

But a global recovery is still some way off - perhaps another four or five years, according to some, said Ramos. And there are questions over whether the tried-and-tested instruments that policymakers understand and are comfortable with are, in fact, enough to tackle the structural problems that are plaguing world economies.

But care should also be taken once (if?) the world finally does recover, Ramos noted.