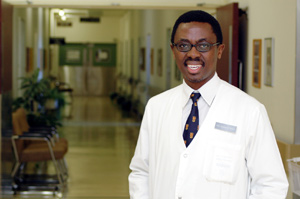 Prof Bongani Mayosi is among the UCT researchers who have been recognised for their work by the NRF.

Professor Bongani Mayosi, head of the Department of Medicine, received the NRF Transformation of the Science Cohort Award, which recognises an individual who, according to the organisation, "has played an outstanding role in addressing the challenges of getting more women and black scientists to advance world-class research performance". Mayosi was hailed for his scholarly work, as well as for his contributions to mentorship, the establishment of research capacity-building programmes and the development of healthcare policy.

In addition, the NRF renewed the A-ratings of Professor Frank Brombacher, who holds the national research chair for the immunology of infectious diseases in Africa, and Professor George Janelidze of the Department of Mathematics and Applied Mathematics. These ratings confirm their standings as world leaders in their fields.

In addition, Professors David Glasser and Lyn Wadley, UCT graduates now both based at the University of the Witwatersrand, also received A-ratings.