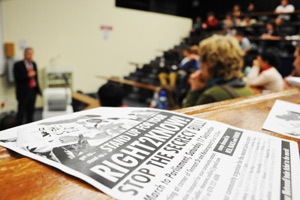 Discussion on the Protection of Information Bill at UCT continued with a lunch-time talk, titled Secrecy and Academia, on 14 September.

Part of the lead-up to Saturday's Stop the Secrecy Bill march to Parliament, the event was hosted by the Students' Representative Council, Students for Law and Social Justice, the History and Current Affairs Society and the Debating Union.

Leading the discussion were the vice-chancellor, Dr Max Price, and Professor David Benatar of the Department of Philosophy. The talk weighed up the bill's pros (like ensuring state security) and cons (like classifying information that may actually be in the public's best interest).

"The problem we have with the bill is that it doesn't offer any public defence clause," said Price. "There are things we should be criticising the government about."

Benatar concurred. "In a proper execution of our democratic rights we need information about what our government is doing," he said. "If we don't [know], the judgement that we make in voting is uninformed."

The above student groups have lined up a full programme of events for the week. It kicked off with a talk with representatives of the coalition group that is staging Saturday's march, Right to Know, on 13 September, and another discussion later that evening.

And on the evening of 15 September, Judge Dennis Davis will chair a debate between Dario Milo, associate professor at Wits University; Dennis Dhlomo, special advisor to the Minister of State Security; Fatima Hassan, co-director, with Zackie Achmat, of the non-profit organisation Ndifuna Ukwazi, which looks at leadership training and social justice issues; and Martin Welz, editor of the magazine Noseweek. This event takes place in Jameson Hall, starting at 17h45.

View the video on UCT joining in the Right 2 Know March against the Protection of State Information Bill on Saturday, 13 September at 10h30.