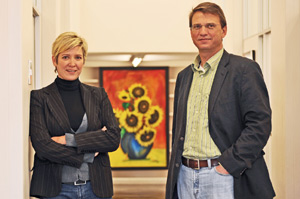 Not so flowery: UCT's Prof Lillian Artz and UWC's Lukas Muntingh are leading a project that will look into the use of torture in Africa.

Today many around the country, and wider, will commemorate the death of struggle icon Steve Biko. (UCT will host the Steve Biko Memorial Lecture this evening, for example.)

That adds some perspective to the work done by a new initiative to address the use of torture in African countries.

Despite the fact that most African states have ratified the United Nations Convention against Torture (UNCAT), this gross human rights violation is very much alive and well, especially in situations and areas where people are denied much of their liberties. Claims that torture still takes place in detention facilities within emerging African democracies are often met with indifference.

In spite of Article 5 of the Universal Declaration of Human Rights and Article 5 of the African Charter on Human and People's Rights, which guarantee the right of all people to be free from torture, and the efforts of the African Commission on Human and People's Rights (ACHPR), much work remains to be done to prevent and eradicate torture in Africa.

The initiative focuses on six post-conflict African countries (Burundi, Kenya, Mozambique, Rwanda, South Africa and Uganda), and aims to develop guidelines and norms to prevent and eradicate torture and other ill treatment in places of detention. Standards, like those set by the UNCAT, are often too abstract to have operational meaning. Furthermore, international instruments are often seen as foreign or imposed.

"With Article 5, we aim to develop clear standards that are context-relevant to each country," says initiative co-ordinator, Professor Lillian Artz, who is based at the GHJRU.

"In South Africa, for example, prison conditions vary greatly," explains project co-ordinator, Lukas Muntingh of UWC. "Some are world class, but some are well below what we should expect in a constitutional democracy."

"It's another vestige from the continent's colonial past", he argues. "In Africa, we have this colonial hangover. The ways of the colonial powers were perpetuated by people who came into power, and there isn't always great awareness around human rights issues."

It was only with the death of Steve Biko in 1977 that the UN General Assembly commenced work on the drafting of the UNCAT, observes Muntingh. "Prisoners should be made aware of their rights, and those in charge of their responsibilities. After all, what is monitored is managed."

"These countries are all going through a critical period of democratisation and development," says Artz. "The timing is good to work within that reformatory gap."

The project will kick off with baseline studies to establish the state of affairs in each country. The project is still in its inception stages, but the research team has well established relationships with human rights institutions in the target countries, as well as with the African Commission on Human and People's Rights.

For now, the team is looking to establish an appropriate methodology. And there may well later be opportunities to expand its examination of places of detention beyond prisons and police cells to psychiatric institutions, repatriation centres and juvenile detention centres, among other facilities.

The point of departure though, they agree, is that there never is an excuse for torture; the prohibition is absolute.