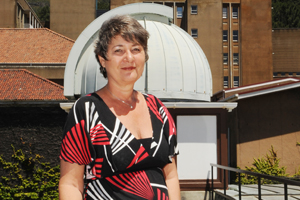 Four UCT scientists were named among the winners of the 2011 South African Women in Science Awards, announced and presented by the minister of science and technology, Naledi Pandor, at a gala dinner at the Presidential Guest House in Pretoria on 19 August. Prof Renée Kraan-Korteweg (in picture), head of the Department of Astronomy, was named the second runner-up in the life, natural and engineering sciences category of the Distinguished Women in Science Award. Aisha-Bibi Pandor of the Division of Human Genetics won a Department of Science and Technology (DST) doctoral fellowship for her work. TATA Africa Scholarships also went to UCT master's graduate Tozama Ogunleye, now doing her doctoral work at Wits, and master's student Neann Mathai of the Department of Computer Science. The awards form part of the DST's efforts to increase the number of women scientists and researchers in the country. 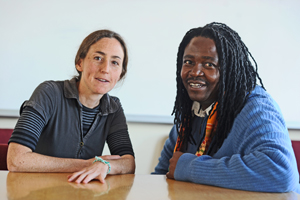 Neo Lekgotla laga Ramoupi of the Africa Institute of South Africa called for a genuine shift away from Eurocentric education, as the latter reflects a continuous marginalisation and exclusion of other knowledge production, particularly knowledge with an African focus. Ramoupi was presenting a seminar, Deconstructing Eurocentric Education: Teaching African-centred curriculum at the universities of Fort Hare & Cape Town, hosted by UCT's Centre for African studies as part of its series on Undisciplining Knowledge: Theories, practices & imaginaries. "We must learn from Africa what happened in Africa," said Ramoupi (right in picture with Kylie Thomas of the Department of English Language and Literature). 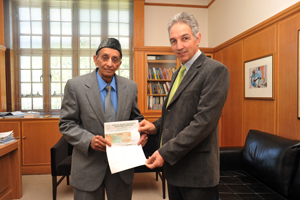 UCT vice-chancellor, Dr Max Price, praised the "fantastic" work of the Hospital Welfare and Muslim Educational Movement (HWMEM) when the organisation handed the university a bursary cheque of R146 000 recently. And that wasn't all. Following government's decision that final-year students will have their National Student Financial Aid Scheme loans converted to bursaries, HWMEM promised to make a further R80 000 to R100 000 available for needy students at UCT. The organisation has been making annual contribution towards student coffers since the late 1960s. In picture, Price accepts the latest cheque from the HWMEM's life president, 92-year-old Mohamed Tahir Sonday. 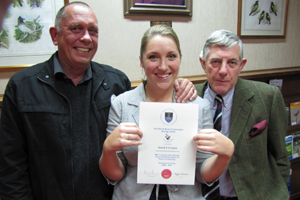 Sarah Lewis has been named as the top student in the 2010/2011 class of the master's programme in conservation biology, run by the Percy FitzPatrick Institute of African Ornithology. Lewis, who was born and trained in England but has since discovered a passion for African conservation, is one of four students in the class that completed the course with distinction. In her project, supervised by Assoc Prof Peter Ryan, Lewis looked at the Boulders Beach colony of Spheniscus demersus, aka the African penguin, as an ecotourism resource. The class award is sponsored by the Johnson Family Trust, and is made in celebration of the Fitztitute's 50th anniversary in 2010. In picture Lewis is congratulated by Prof Phil Hockey (left) and sponsor Peter Johnson.