Collective learning is the key for future intellectuals 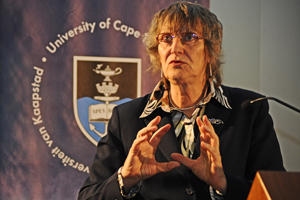 Invented as a symbol of modernity and cultural change, the image of the intellectual is easily parodied.

Renowned sociologist Professor Raewyn Connell of the University of Sydney in Australia believes that although the image of the "dissident, boundary-pushing philosopher of the Paris café, smoking Gauloise cigarettes between attempts at revolution" isn't accurate, it's not an entirely absurd image.

"But," Connell argued in her Vice-Chancellor's Open Lecture on 20 July, "we need to look more closely at what is presupposed, and who is forgotten, in these stories about intellectuals, if we are to face the realities of the 21st century."

Titled Intellectuals in the 21st-Century World, Connell's lecture recontextualised the intellectual, firstly as a labour force, and secondly from a global rather than a Western perspective.

Intellectuals, Connell notes, are a workforce, and produce "intellectual labour".

"Our image of the intellectual tends to focus on great minds and great breakthroughs," said Connell, "but most intellectual work is routine." In her research survey, one of Connell's respondents wrote: "a well-trained monkey can do this work".

In looking at intellectualism "beyond the global North" Connell used her own discipline as an example.

"The colonised world provided sociology with much of its data about the 'primitive'," she said. "A good many sociological texts of the 'classical' era were little more than assemblages of anecdotes, the spicier the better. Sumner's great work Folkways, for instance, ranges from incest and cannibalism to sacred prostitution and child sacrifice."

This resulted in "academic dependency" in the "global periphery" where knowledge production became "oriented to the metropole, and theories and methods were, with few exceptions, imported from the metropole".

With the focus on globalisation in the 1990s, explained Connell, sociologists began talking about world society, "but they generalised accounts that had already been worked out within the sociology of the metropole. A formless jelly of hybridisation covered the globe, according to texts that usually denied that there was anything like an imperial power centre".

But what can be done about it?

"One important step is simply to recognise this history - a hidden history in most disciplinary cultures. Another step is to recognise a wider history. Many different patterns of intellectual life have existed in the world beyond the imperial metropole."

Connell argued for a "mutual learning process" - a relation between knowledge systems that is neither subordination nor external co-existence, resulting in a "collective learning".

"These issues matter," said Connell. "In a world dependent as never before on organised knowledge, a great deal is at stake in the relationship between the world and the globalised university system that we academics both live in, and make."

(Download the pod cast or view the video here.)