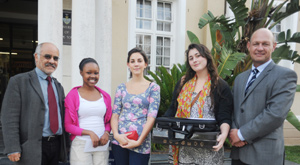 Two UCT students have won handsome prizes, and a third one stands to take home a brand new vehicle, after they took part in the First Things First campaign early this year.

Nandi Rayner walked away with a laptop, Kelsey Gibbs received a book voucher, and Ntshediseng Matla has been entered into a grand-prize draw for a Toyota Yaris, which takes place at the 5th Southern Africa AIDS Conference in Durban in June.

It aims to generate awareness around HIV/AIDS, and encourages first-year students at 17 universities, including UCT, around the country to be counseled and tested.

About 20 000 students participated. According to IMSA's Dirk van Niekerk, they were "thrilled" by the response to the campaign, and the turnout bodes well for the next phase. At a prize handover on 20 May, deputy vice-chancellor Professor Crain Soudien hailed IMSA, and said the campaign was critical for UCT to maintain the current low levels of HIV/AIDS prevalence among its students.