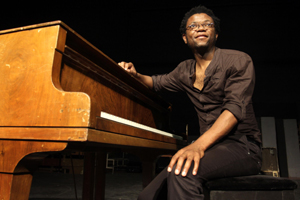 Feeling it: Neo Muyanga's production, Memory of how it feels, is currently on show at the Baxter Golden Arrow Studio.

Popular music artist and composer Neo Muyanga makes his debut as a writer with the staging of Memory of how it feels, currently on show at the Baxter Golden Arrow Studio.

Inspired by the traditional Zulu practice of exchanging beads encoded with secret messages between lovers, the production's narration, dance and chamber music (which combines classical and traditional music) are craftily strung together to create a work which reflects both romantic and platonic new love.

Muyanga hails from Soweto and grew up in the Free State and Botswana, and then studied in Italy and worked in the UK. He co-founded BLK Sonshine and has since composed and directed numerous musical productions, and toured a number of overseas countries.

But what inspired him to explore writing?

"I love words, I love how words live with music and how that lives with visual images and movement, dance," he explains.