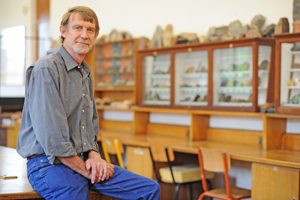 In the hot seat: As new dean of the Faculty of Science, Prof Anton le Roex knows he'll have his work cut out for him.

Professor Anton le Roex of the Department of Geological Sciences has taken the helm as the new Dean of Science, replacing Professor Kathy Driver, whose term as dean ended last year. A former deputy dean of the faculty, a position he held since 2001, Le Roex took office on 1 January.

In addition to his teaching and research duties at UCT, Le Roex has held numerous administrative posts. He headed the Department of Geological Sciences from 1991 to 2005, has been a member of the Senate since 1991, and was a student advisor in the science faculty from 1986 to 2002. Since 1998 he has served on 17 UCT and faculty standing committees, and he remains active on at least 10, two of which he chairs.

His research interests lie in the field of igneous geochemistry and he has authored or co-authored 86 articles in peer-reviewed journals, two chapters in books, 23 extended abstracts and 95 abstracts. Since 1986 he has held a B1 rating from the NRF, and has been a Fellow of UCT since 2004.

Le Roex understands that, for the duration of the deanship at least, much of his academic work will have to take a back seat. The full-time move into administration, he says, springs from the crossroads he found himself at after nearly 10 years as deputy dean.

"The time had come for a change," he observes. "I had to consider either moving more formally into a higher administrative position, or withdrawing and moving back to a full-time research and teaching position."

The job is made easier by virtue of the faculty's high standing - it's easily the most decorated and celebrated science faculty in the country and on the continent (as the NRF ratings and international rankings will attest), and the international credibility of its degrees. The trick is to keep up that momentum; and as an academic himself, he realises that the faculty's reputation is built on that of its researchers.

"My job - and I've enjoyed doing this with my colleagues as deputy dean - is to try and facilitate activities that will allow them to operate more efficiently, and hopefully help the faculty grow in strength," Le Roex says.

There is one major challenge that the faculty will have to pay attention to, he believes.

"We have a lot of work to do to get our undergraduate throughput up. I think we can do better, and we have to be cleverer about how to do this without compromising what we believe are the appropriate standards."