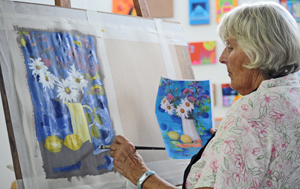 Broad strokes: Painting and art courses were popular once again at this year's UCT Summer School.

Averaging about three courses each, 2 400 students accounted for over 6 600 registrations for 46 courses during UCT's Summer School 2011, which took place from 16 to 27 January.

"But these numbers don't account for people who registered at the door," notes Medee Rall, director of UCT's Centre for Extra-Mural Studies. "Some came to individual lectures and paid at the door. This was particularly the case with the Baxter music course."