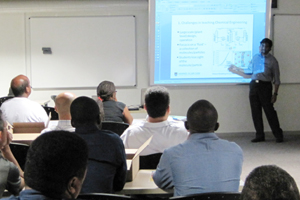 Innovative: Dr Randhir Rawatlal presents his software which will be tested through the Siyafunda Project.

Dr Randhir Rawatlal, director of undergraduate studies in the Department of Chemical Engineering at UCT, is researching the effectiveness of animated simulations in education.

A piece of software he wrote "for fun" in teaching his third-year reactor design class has proved to be so successful that he is now writing additional simulations for use by school learners in the study of maths and science.

Rawatlal designed a simulation that showed how particles "bang about" inside a reactor, using animation and colour to explain and illustrate some complex concepts in chemical engineering. He then found that the group who viewed the simulation performed 25% better in a short quiz than the standard (chalk-and-talk) group who didn't get to see the simulation until after the quiz.

"More importantly, the comments [the simulation-assisted] group wrote on their scripts showed a far deeper level of understanding than the standard group," Rawatlal explains.

He has since deduced that the technology should be introduced earlier, perhaps even at secondary and primary levels, where core concepts are first established in students' psyche.

That sparked his interest in school education research, and feedback from teachers showed that the simulations would be invaluable in schools across the spectrum.

UCT's SHAWCO was also brought on board, together with the interactive white board project (Khanya) by the Western Cape Education Department. Through these partnerships, the software will be tested at a variety of learning locations in the Western Cape. Then Rawatlal teamed-up with John Bransby, head of science at Herzlia High School in Vredehoek, a partnership that saw a variety of simulations being developed for the teaching of maths and physical science, and on 5 February, the project was launched at UCT. Through the Siyafunda Project, the software will be further developed and tested at 11 disadvantaged schools.

"I expect to release a significant amount of content to schools in 2012," Rawatlal promised.

The software could be an asset to learners and teachers alike.

"The main idea is that students often miss the point because they become buried in the equations and language, and mathematics becomes an obstacle rather than a valuable tool," Rawatlal said.

"The real aim here is to provoke the students' imagination and creativity so that they begin to truly engage with the study material. Ultimately, the students should understand the material at a far deeper level than is needed merely to get a pass in an exam."

And it could also be an answer to the shortage of maths and science teachers.

"This software has a self-study/training mode, specifically designed to guide a learner or even a teacher outside the classroom to bring himself/herself up to speed on the material, or inside the classroom to deliver a polished, guided lecture. I believe that human contact is essential in education, and that teachers may benefit greatly from this sort of hidden technical assistance."