Theatre giants take to the stage at UCT 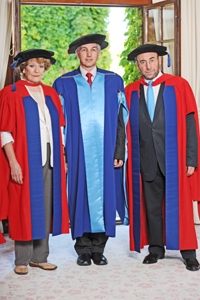 Acclaimed thespians Sir Antony Sher and Janet Suzman (Monday Paper article) added a touch of class to graduation proceedings yesterday when they received honorary doctorates of letters (DLitt) from UCT. In a break from recent practice, the recipients also addressed the gathering.

In total, just over 1 000 students were capped yesterday.

Today sees the final two graduation ceremonies. The 10h00 ceremony brought together graduands from the Faculties of Law, Science and Health Sciences.

This afternoon at 15h00, the Faculty of Humanities hosts the last of UCT's 12 graduation ceremonies of the past week.