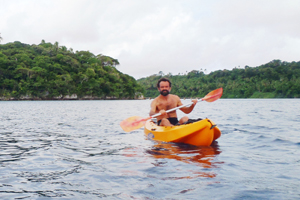 Denizens of the deep: Prof Jean-Paul van Belle celebrated his ad hominem promotion in an unusual manner, swimming with whales off the coast of Tonga.

Promotion to full professorship is a reason to celebrate in anyone's book. In the Faculty of Commerce, the event called for something a little more esoteric for Professor Jean-Paul van Belle: a swim with whales in the South Pacific.

Van Belle, who was one of a number of ad hominem promotions announced recently, was promoted from associate professor to full professor.

There are a few things that whales in South Pacific around Tonga have in common with the whales which frequent False Bay in the Cape. One is the strong ocean wind - in fact, Tonga was originally named Tongahahake, 'the wind that blows from the South East'. Another is that they are both likely to encounter the snorkelling, bearded professor from UCT.

Such was the case this month when two humpbacked whales frolicking around the Kingdom of Tonga came within two metres of the flipper-clad professor.

Tonga is one of the only places on earth where divers can get up close to humpbacked whales. They migrate from their feeding grounds in Antarctica, along the New Zealand coast, to Tonga, where they stay from July through September to court, mate and calve. A number of dive operators follow very strict guidelines to enable humans to experience these majestic creatures in their natural habitat.

Van Belle, en route from Japan, where he'd delivered a conference at Koyasan, decided to stop off in Tonga on his way home. Consisting of 176 islands (most of them uninhabited) Tonga lies in the heart of the South Pacific, east of Fiji and to the south of Samoa, and just west of the International Dateline.

Van Belle's experience with the whales touched him deeply.

"It's impossible to describe in words," he said.

"I felt very humble. It's not as if I was watching them - they were watching me!"

It was not his first encounter with whales. Some time back he was swimming in False Bay when two Southern Right whales swam towards him. He is also keen to go swimming with seals. Perhaps to celebrate another milestone? Whatever happens, it is clear that the bar has been raised for ad hominem celebrations at UCT.