UCT toasts the Mazda Wildlife Fund on its 20th anniversary 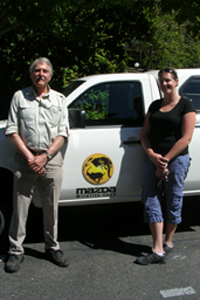 Since 1990, the Mazda Wildlife Fund has been nurturing South Africa's wildlife through, among other things, the loan of Mazda vehicles to conservation projects, including ones run at UCT.

"The Fund is dedicated to conserving our rich and irreplaceable natural heritage, having invested over R23 million in conservation areas such as education, conservation and research," says Humphrey LeGrice, manager of the fund.

Over these two decades, seven Mazda Wildlife Fund vehicles have been loaned to UCT research projects in the Departments of Zoology and Botany, including those conducted by the Percy FitzPatrick Institute of African Ornithology (aka Fitztitute). This amounts to more than 21 years of research support, noted Dr Rob Little, manager of the Fiztitute's Department of Science and Technology/National Research Foundation Centre of Excellence.

The Fiztitute projects that have benefited from the fund's vehicles include bird and frog atlasses, and the conservation of coastal birds and the Cape Flora. The FitzPatrick Institute's Ludwig's Bustard project currently makes use of a Mazda 4x4 double cab, and its Cape Parrot project will receive a vehicle in 2011.

Recently, the FitzPatrick Institute extended its congratulations, on behalf of UCT, to the Mazda Wildlife Fund on its birthday.

"Without these vehicles, many of the projects would have had serious budgetary constraints on their successes and outcomes," says Little.