Airbus collaboration off to a flying start 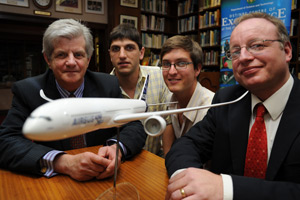 Birds do it. So well, in fact, that Airbus, the world's number one aircraft manufacturer, has partnered with UCT researchers to see if formation flying - that thing that birds do so well - could perhaps in time be applied to getting people around.

Out in nature, large birds benefit from co-operative flying to save energy, giving them increased range, explains Professor Christiaan Redelinghuys, head of UCT's Department of Mechanical Engineering, which is undertaking a two-part study. When flying in formation, the leading bird's wings generate trailing vortices (whirling masses) of air - just as fixed-wing aircraft do.

It's the birds flying in the lead bird's wake that benefit most from this, getting a free lift from the vortices and, as a result, using less energy to fly. The military has been biomimicking birds for years and are old hands at formation flying. For obvious reasons (safety, for one) passenger carriers have been less inclined to try on the idea.

But now Airbus is keen to push the envelope and explore, on paper, the potential 'green' application of formation flying.

"Grouping together aircraft flying similar routes, for example from Europe to Africa, could in theory provide a reduction in fuel burn and emissions," says Dale King, senior manager for research and technology partnerships at Airbus.

A lot of the finer detail - such as getting passengers comfortable with seeing other aircraft in close quarters through the window - would still have to be addressed, however, he points out. (In the picture is an artist's impression of what some Airbus planes flying in formation would look like.)

Formation flying, if it ever comes off, is still some way down the line. In the meantime, studies have suggested that energy savings could be as high as 20%, notes Redelinghuys.

"If we could safely harness those benefits, we could reduce the aviation industry's consumption of fossil fuels," he says. "The potential benefits are enormous."

At a press briefing at UCT '“ fittingly hosted by the Percy FitzPatrick Institute of African Ornithology in its Niven Library '“ on 22 November, Airbus unveiled groundwork modelling studies that will be conducted by Redelinghuys and two postgraduate students in his Aeronautical Research Group.

Both students will be supported by Airbus and South Africa's National Aerospace Centre, based at the University of the Witwatersrand.

The collaboration is but the latest in a string of South African projects sponsored by Airbus. The aim of which is to draw on expertise and ideas from around the globe.

"We don't have a monopoly on good ideas at Airbus," says King.