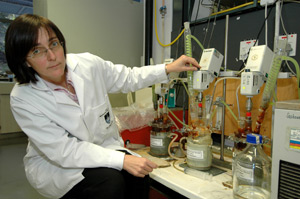 Algae as an energy source? The work of Professor Sue Harrison and her team in the Centre for Bioprocess Engineering Research (CeBER) at the Department of Chemical Engineering at UCT suggests that the potential of this green energy source is now being better understood.

For the past four years Harrison, and her team have been researching the alternative energy potential of algae. The research is sponsored by SANERI (South African National Energy Institute) and industrial partners, and has identified that algae is a multiple energy resource.

Harrison first started the algal research in a 'non-energy' area, experimenting with colour compounds in algae such as the one that improves the pink colour of fish when added to their feed; a naturally occurring carotenoid compound called astaxanthin.

"The carotenoids are both colourants and antioxidants, which points to nutritional value for humans, and a range of other applications" said Harrison.

She says that through the biorefinery concept, algae has potential to provide not only valuable compounds such as antioxidants and speciality oils, but also an alternative source for protein, bio-diesel and electricity – which could be produced from methane released by anaerobic (without oxygen) digestion of the algae.

"There is a synergy between all these characteristics, and we want to bring them all together.

"The challenge now is to find ways to cultivate algae successfully at high productivity, maximising its use of CO2 and the sun's energy," she said.

These 'tools' range from molecular analysis of the mixed algal populations through metabolic modelling to assist in maximising the products of interest, to proposing process flow sheets and interrogating their environmental benefit or impact.