Blown away at VC's concert 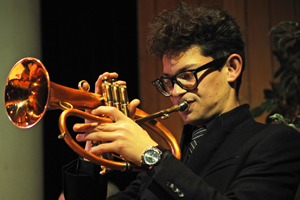 Darren English performs on the opening night of the Vice-Chancellor's Concert.

Vice-chancellor Dr Max Price's guest appearance at this year's concert was fitting in its own way: this is the SACM's centenary year and the programme ensured it was a tribute to South Africa's music heritage.

Price kicked off with saxophonist Basil 'Manenberg' Coetzee's composition Manenberg, a South African jazz classic. For the first time, the SACM featured ensembles from their brass department, including a piece on the mighty Von Beckerath organ, followed by a piano solo (Olga Rademan playing Liszt) and a selection of music performed by the college's opera students, who played to critical acclaim earlier this year.

View photo album of the concert.