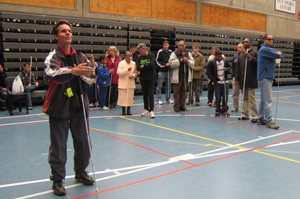 Kish became something of a celebrity in his field when he appeared on the Discovery Channel explaining his technique for enabling blind people to obtain an optimal amount of information from their environment, so they can move more freely and independently.

He teaches the use of an ultra-light cane combined with what he calls "human echolocation", the ability to use sound reflected from the environment to detect objects.

Twenty attendees practised locating obstacles by using various tongue clicks to produce echoes from objects in the environment. Kish, who has trained blind people all over the world, was delighted with the readiness with which his South African pupils attempted and mastered the clicks, which he said took non-South Africans ages to perfect.

The workshop was presented jointly by UCT's Disability Unit and the St Dunstan's Association for War-Blinded Veterans.