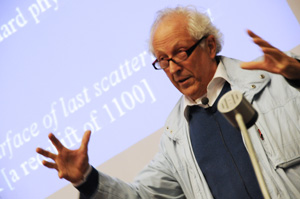 The medal was presented to Ellis by the SAIP's acting president, Professor Simon Connell, at a banquet at the CSIR Convention Centre in Pretoria. The Gold Medal is awarded every second year, and this is the eighteenth such award. Several UCT students were also recipients of prizes, awarded at the same dinner, for their various presentations.

One excerpt from Ellis' citation reads: "A powerful interest in matters well beyond his research speciality is almost a defining characteristic of George Ellis. His fierce and outspoken opposition to apartheid went way beyond written criticism; he was frequently present to lend what support he could to the dispossessed when the bulldozers went in to destroy their shacks during the forced removals. His publications on social problems include discussions of homelessness, the nature of poverty, low income housing policy, revisions of the school syllabus, science research policy and a proposal for a peace education curriculum. George is a consistent advocate of free and open discussion on all matters within the scientific community and in society generally."